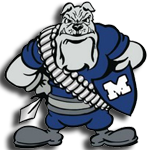 It took 17 years, but a Miami coach won his coaching debut on Friday night. Zach Gardner, at the helm in Miami after going 96-32 in 11 season at Afton, guided the Wardogs to a 24-10 victory over Claremore Sequoyah.

Shawn Booth was the last Miami coach to win in his debut back in 2001.

"Sure everyone wants to win each week, but as a staff we knew it was crucial to win early," Gardner said. "We have had these kids grinding since June. This just shows their efforts are paying off."

Miami and Claremore Sequoyah were tied a 10 at halftime, but the Wardogs' Gavin Payton found Jordan Freeman for a 21-yard touchdown pass with 6:03 left in the third quarter.

Caden Folks punctuated Miami's scoring with a 2-yard touchdown run in the fourth quarter. Folks, Payton and Freeman combined to rush for 192 yards and two touchdowns.

"Our skill guys played very well throughout the night," Gardner said. "I strongly felt we were winning in the trenches through the way our kids took over in the second half."

Miami will host Jay on Friday night, and Claremore Sequoyah will be at Hilldale.

Guthrie's defense made life miserable for Enid in the Bluejays' 57-19 rout at D. Bruce Selby Stadium on Friday night.

Leading the way for Guthrie (1-0) was strong safety J.D. Coonfield, who had a 74-yard interception return for a touchdown to go along with one sack, one tackle for loss, two pass break-ups and 16 tackles.

On offense, Brody Hinkle had six catches for 121 yards and a touchdown for Guthrie.

Keith Riggs became the second Jenks head coach to lead the Trojans since 1996. After Allan Trimble's 22-year run of going 251-42, Riggs took over for his mentor and led Class 6A No. 4 Jenks to a 28-14 victory over Bixby at Lee Snider Stadium.

The Trojans (1-0), who started 0-4 last season, scored the game's first two touchdowns on a 65-yard score by Dreysen Watters and a 25-yard TD strike from Ian Corwin to Braden Phipps.

Bixby (0-1) answered with Mason Williams' 34-yard touchdown pass to Cade Cavender, and the Spartans were with 14-7 at halftime.

But Jenks struck again for two more score to increase its lead in the second half.

Noah Hernandez had a 15-yard touchdown run in the third quarter, and he followed with a 13-yard TD scamper in the fourth.

Watters and Hernandez combined for 163 yards on 25 carries for the Trojans.

Poteau and El Reno were in desperate need of a game to fill out their 2018 schedule. And just like that, a matchup was born.

Turns out, Class 4A No. 3 Poteau benefited the most with a 38-19 victory over El Reno at Costner Stadium.

"We both had scheduling issues and we both needed a game so I said what the heck, might as well play," Poteau coach Forrest Mazey said. "I would rather do that then play nine games."

The Pirates (1-0) claimed a victory thanks to quarterback Jace Pitchford going 13 of 24 for 259 yards and three touchdowns. He had touchdown throws of 62, 37 and 17 yards to Todd Mattox, Easton Francis and Cameron Duncan, respectively.

"I think our kids found a way to win with guts," Mazey said. "We didn't play great in all facets of the game, but they found a way to get it done when it counted."

"Very impressive," Mazey said of his defense. "They always have a good game plan, and they did a great job executing it."

Sirleaf, a senior wideout for Victory Christian, caught three passes for 185 yards and two touchdowns in the Conquerors' 52-6 win over McLain on Friday night.

"Josh showed up every day in the summer for workouts, and then went to work every day with his family landscaping and cleaning business," Maddox said of Sirleaf, who also recorded three interceptions on defense. "He knows how to work and that carries over on the football field. He's pound for pound one of the strongest players I have coached."

With 10 seconds left in the first quarter, Sirleaf scored Victory Christan's first touchdown on a 54-yard pass from Garrett Williams. Sirleaf would later score on a touchdown grab of 98 yards late in the second quarter.

Williams finished with 355 yards and five touchdowns while completing 7 of 11 passes.

"Have a week zero game can pose some challenges with losing an extra week of practice," Maddox said. "I thought our players handled it well."

The victory is Maddox's first after he left his offensive coordinator job at Jenks to replace Ron Smith in south Tulsa.

"I never focused on that going into the game," Maddox said of getting his first head-coaching victory. "I was just excited to see some of our hard work and preparation come to life on the field."

With time running down, Pauls Valley's Tyce Davidson came up with an interception to secure the Panthers' 19-18 win over Lindsay on Friday.

Quarterback Jack Grimmett paced Pauls Valley's offense with 28 carries for 205 yards and a touchdown. The Panthers rushed for 329 yards as a team on 56 carries.

The Panthers' other two touchdowns were courtesy of runs by Jacob McElhaney.

Pauls Valley was forced to punt with a minute left in the game, but Lindsay picked up only one first down before the Panthers logged back-to-back sacks before Davison's interception.

Jacob Bruce was a one-man wrecking crew for Hulbert at Rider Field on Friday night. The senior tailback rushed for 321 yards and four touchdowns on 24 carries, in addition to two touchdowns on kickoff returns.

But Class A No. 4 Hominy managed to hang on and beat Hulbert 58-41 in a high-scoring affair.

"Hulbert is a good football team," Hominy coach Caleb Christian said. "We are blessed and fortunate to leave with a win."

Luckily for Hominy (1-0), it had Blake Hipp leading the way. The senior quarterback completed 7 of 14 passes for 290 yards and five touchdowns, plus 84 yards and three touchdowns on 11 carries.

"Blake Hipp is a coach's dream at quarterback," Christian said. "Tough player that knows the offense and leads the team at a high level."

Hipp responded 57 seconds later with a 51-yard touchdown pass to Clifford Hayes to give the Bucks a 40-29 halftime lead.

In the end, Hominy had 583 yards on offense.

"Our offensive line is the backbone of our offense," Christian said. "They hang their hat on being physical and being in shape."