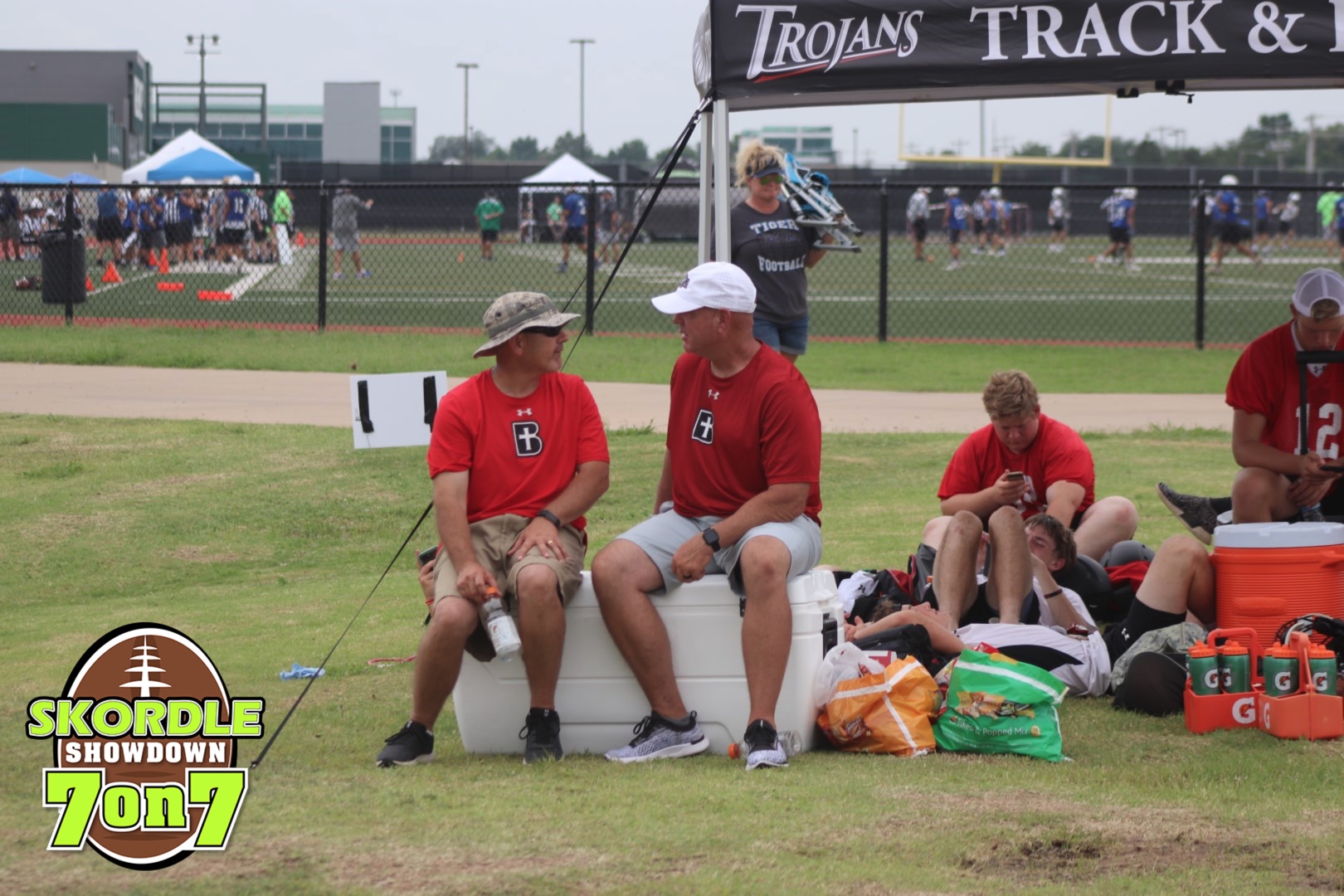 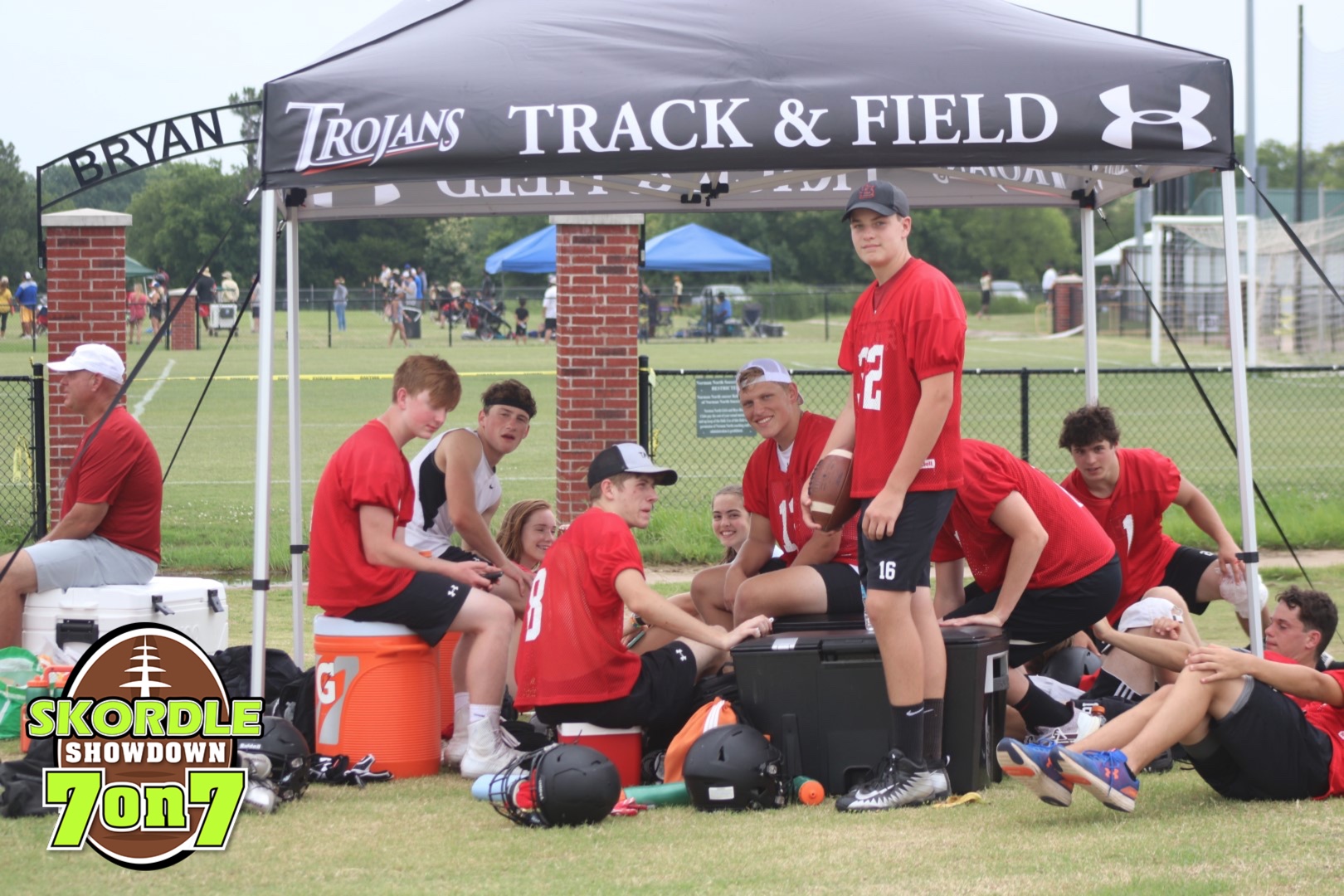 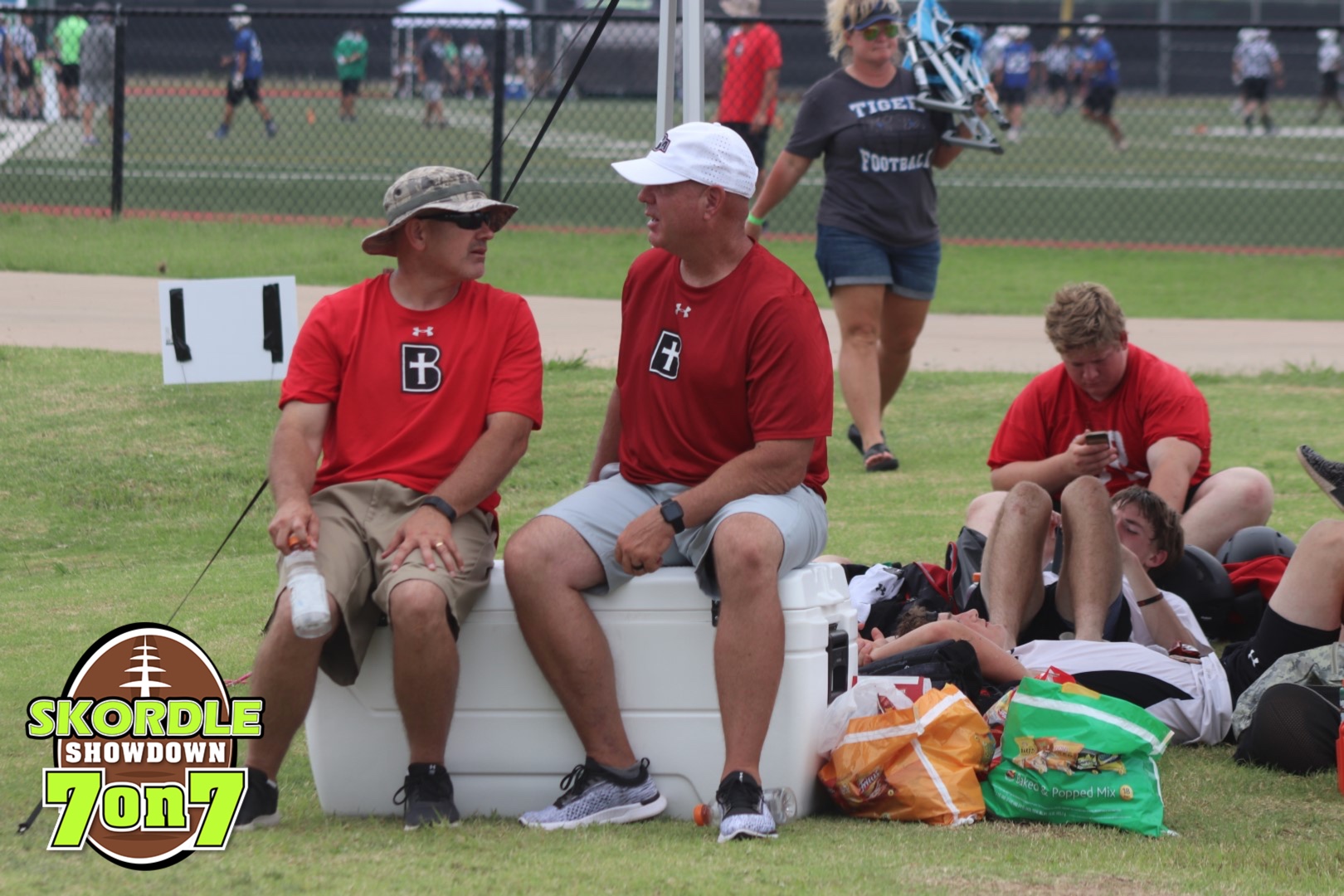 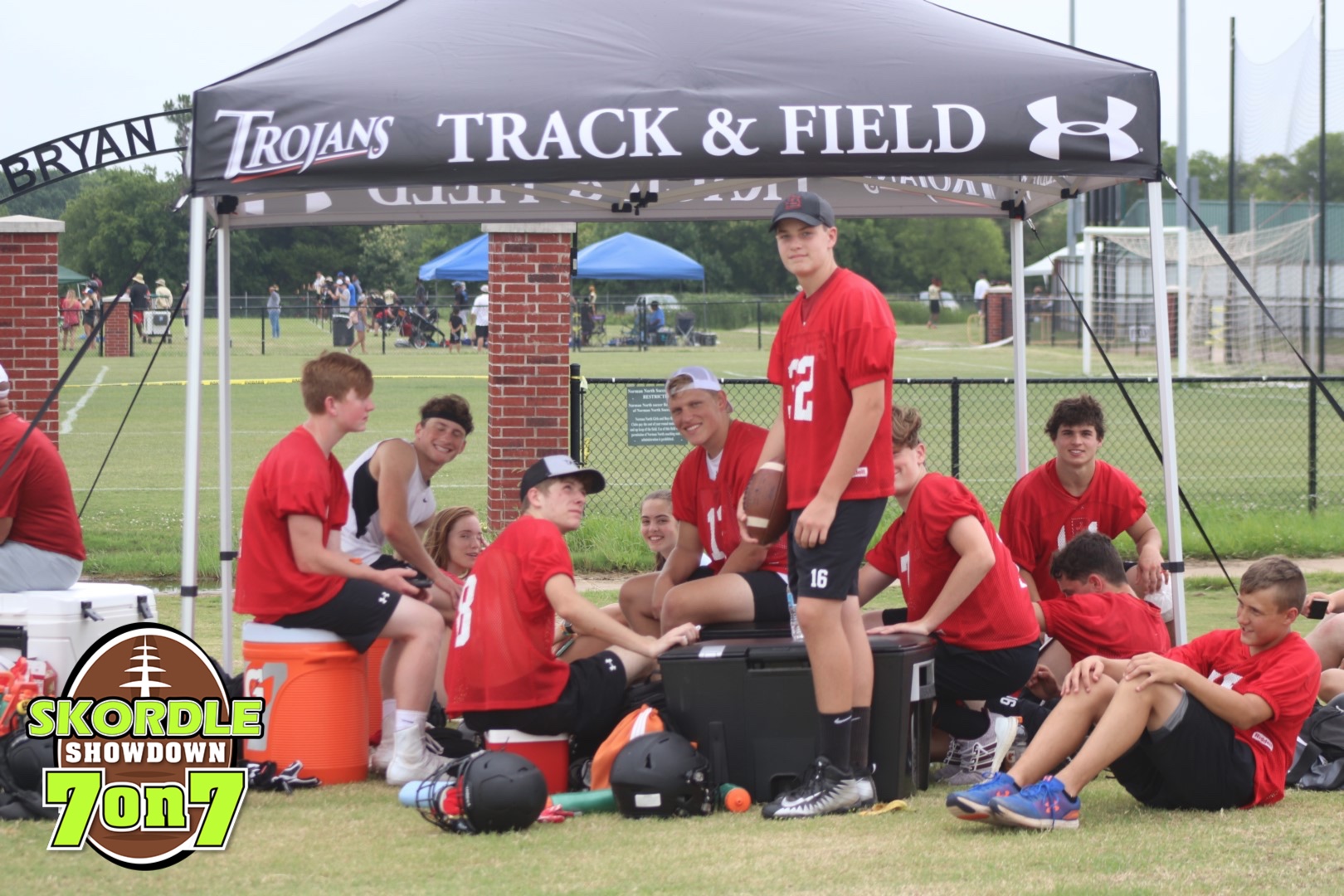 It's time for fall break, and some district titles could be decided this week.

1. 6AII No. 4 Midwest City (5-2) at 6AII No. 3 Del City (6-1): District 6AII-1 has become a three-team race, and this one will go a long way in deciding whether it's a two-horse race or not. If Midwest City wins, it remains a three-team sprint to the end -- so long as Del City knocks off Stillwater in two weeks. A win for Del City sets up a clash for district supremacy on Nov. 2. Midwest City has dominated this matchup with five straight wins dating back to 2013. Overall, Midwest City is 35-16 against its long-time rival.

2. 4A No. 2 Tuttle (7-0) at 4A No. 3 Blanchard (6-1): Buckle up for Blanchard tailback Bryce Madron against Tuttle's defense, which has yielded only 56 points this season. Also, can Blanchard slow down Tuttle quarterback Carson Berryhill? A win for Tuttle all but wraps up the 4A-2 crown. Since 2011, Blanchard has won four of the seven meetings, but before Tuttle had won all 13.

3. 4A No. 4 Bristow (7-0) at 4A No. 5 Wagoner (6-1): This had all the looks of two unbeaten teams clashing for district bragging rights up until Oologah upset Wagoner in overtime last week. Another loss all but keeps Wagoner from winning the 4A-3 crown, and it would be the first time since 2011 that the Bulldogs hadn't claimed a district title. As for Bristow, quarterback Tyler Wayland leads a dynamic rushing attack that's powered by a demoralizing offensive line. The Bulldogs will counter with Schyler Adair in the backfield.

4. 4A No. 7 Broken Bow (6-1) at 4A No. 1 Poteau (7-0): When it comes to two teams not liking one another, here is exhibit A. And this time the District 4A-4 title is up for grabs. A win for Broken Bow all but secures the district title, whereas Poteau still has Hilldale looming on the schedule. Neither one of these teams has given up more than 48 points this season, so don't expect a wild, high-scoring shootout. Poteau and Broken Bow have met every year since 1996, and it's been Poteau with wins in five victories in the last seven seasons.

5. 5A No. 6 Duncan (7-0) at 5A No. 2 Ardmore (7-0): The similarities are striking between these two. Both are 4-0 in 5A-1. Duncan has scored 268 points this season, compared to Ardmore's 267. Then on defense, the Tigers have given up 51 points, whereas Duncan has issued 53 points to opposing teams. So the only question remains is what prevails in the game: Duncan's balanced offensive attack or Ardmore's nonstop rushing attack? Ardmore has won five straight against the Demons, including a 28-7 victory last season.

6. 2A No. 3 Vian (6-1) at 2A No. 6 Holland Hall (5-2): These two generated a memorable showdown during the 2016 playoffs when Holland Hall edged past the Wolverines, 27-26. This time, however, Vian has River Simon and Bodhi Vann back as seniors with the 2A-5 title on the line. The winner can start preparing for the fourth-place finisher in 2A-6.

7. 3A No. 1 Heritage Hall (6-1) at 3A No. 6 Kingfisher (5-2): A Charger victory all but nails down the 3A-1 district title. A win for Kingfisher creates chaos at the top of the district with Heritage Hall, Kingfisher and John Marshall in a three-team clash to the end. The Yellowjackets have scored an average of 38.7 points per game, but can their defense slow down Conner Carey and Billy Ross on the other side of the ball?

8. B No. 6 Laverne (6-1) at B No. 1 Shattuck (6-0): Perhaps the first of two matchups this season? That's how it's gone the past two years. Laverne and Shattuck have squared off in district play -- both games won by Laverne -- and twice in Class B title games -- split between the two schools -- since 2016. Only wrench in the plans this year could be Seiling, a team sitting there unbeaten in B-1 play like Laverne and Shattuck.

9. 2A No. 2 Sperry (7-0) at Victory Christian (6-1): Pure excitement surrounded the outcome of last year's game -- a 26-21 win for Victory Christian. The Conquerors won on a Hail Mary pass at the end of the game when quarterback R.J. Wakley found Caleb Calhoon for a 33-yard touchdown pass. Both of those players are gone now for the Conquerors, who have to win to keep pace with Sperry in 2A-3. A win for Sperry creates a winner-take-all showdown with Beggs in week 10.

10. A No. 3 Minco (6-1) at Christian Heritage (4-3): District A-3 never disappoints when it comes to top-notch matchups each week, so it's no surprise to see this game crack the top 10. Despite being in third place in A-1 right now, Minco has given up the fewest amount of points in the district at 70. Christian Heritage isn't far off with 95. With Crossings Christian and Cashion atop the district standings, the winner of this one at least feels more secure in nabbing a playoff spot. Also, Christian Heritage is 3-0 all-time against Minco with the last game between the two being played in 2009.

Edmond Santa Fe at Westmoore: The Wolves are looking to bounce back from last week's 35-7 loss to Broken Arrow. A win over Westmoore for Edmond Santa Fe would create a clash against Jenks for second place in 6AI-1 next week.

Muskogee at Booker T. Washington: Muskogee's two losses have been by a combined three points this season. Meanwhile, the Hornets continue to struggle on offense, and they just lost a receiving weapon in DJ Jones for the rest of the season.

Mustang at Owasso: Mustang desperately needs to win to keep its playoff hopes alive. Owasso is 3-1 in 6AI-2, but the Rams are issuing 24.7 points per game.

Weatherford at Cache: Weatherford can work its way back into 4A-1 contention with a win. For Cache, it's been quite a week with Arthur McDonald appearing on national shows with his highlight-reel TD run.

Idabel at Stigler: Idabel hammered Stigler last year, 62-10. But 3A-3 has proven to be chaotic every single week, so expect an outcome that further mucks up the 3A-3 standings.

Seminole at Checotah: More 3A-3 craziness here. At this point, both of these teams need victories to stay in postseason contention. Seminole is 4-1 against Checotah, but they haven't met since

Kellyville at Prague: Ponies and Red Devils -- what a combo. District 3A-2 has proven to be pretty deep, and someone among Meeker, Prague, Kellyville and Okemah will miss the playoffs. The outcome of this one could help determine who advances beyond the regular season.

Commerce at Rejoice Christian: Commerce's Chris Ibarra is coming off a monster week against Oklahoma Union last week -- 18 carries, 301 yards, four touchdowns. And that doesn't even account for his defensive contributions. The Ibarra vs. Andrew Crow showdown at running back should be a fun one to watch. 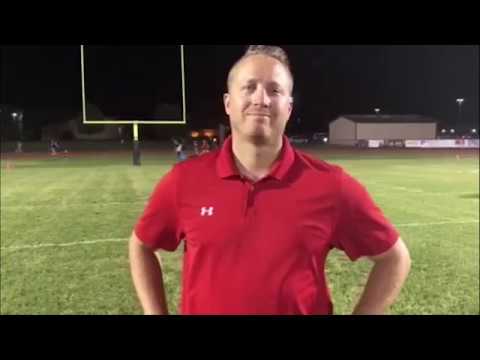